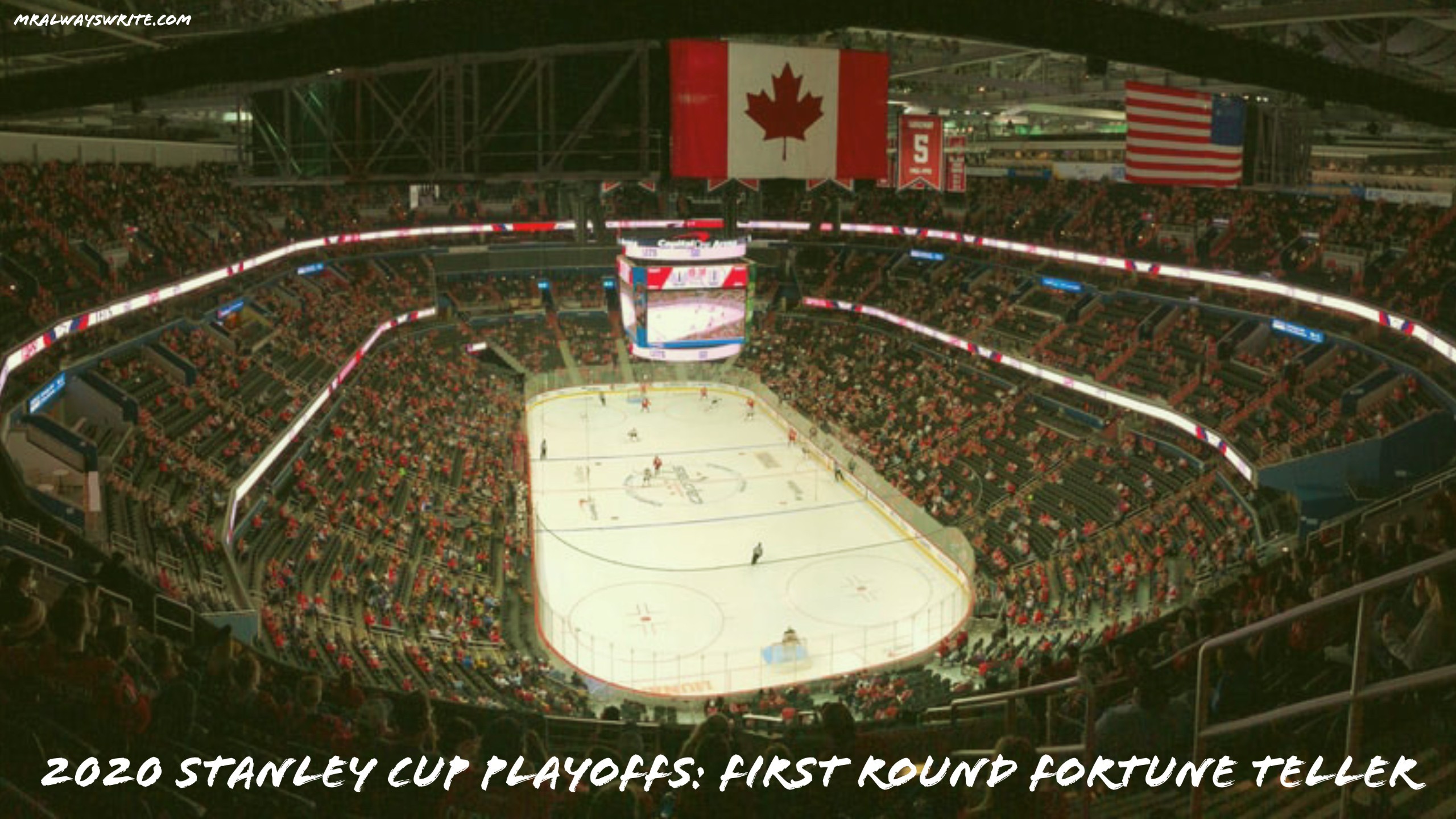 As the Stanley Cup Playoffs shape into a more familiar format, I’ll progress past my play-in predictions in hopes for more success through this round.

As a quick recap, this post-season began with the Stanley Cup Qualifiers. Those pre-playoffs consisted of qualifying match-ups that saw teams in 5th-12th, from each conference, faceoff in a best-of-5 series. That determined who would then move into the First Round.

The qualifier period also included round-robin games, wherein 1st-4th placed teams played each other to then set their respective rankings throughout the remainder of the playoffs.

An additional change for following along this year, especially if you’re one to fill out and follow a bracket, is that teams will be re-seeding each round. There is no set path for any respective team this year, as had become the norm before it.

The highest-ranking club will always face the lowest ranking that remains, followed by the second highest versus second lowest, and so on. Things have already shifted and are now in place for the First Round for the 2020 Stanley Cup Playoffs.

There were upsets along the way, mixed in with expected results, and some flat out surprising storylines. All in all, I’d say I did ok with my first set of predictions.

Now, let’s see how far I can carry that modest momentum.

First and foremost, a quick summary of my results through the play-ins:

Well, that wasn't ideal. And not because it made my predictions record 4-4, but because I'm a fan first. #LeafsForever lose their series to #CBJ in disappointing fashion.#HockeyTwitter #StanleyCuphttps://t.co/n8F16riPUs

Many of the qualifier rounds included teams that matched up pretty closely. The league has so much parity these days, that it’s not unforeseen to have the rankings thrown out the window once two teams hit the ice to compete.

However, some obvious shockers included the Montreal Canadiens overtaking the Pittsburgh Penguins (3-1), the Columbus Blue Jackets beating the Toronto Maple Leafs (3-2), and the Chicago Blackhawks defeating the Edmonton Oilers (3-1).

The latter two of those three have a direct impact upon my fandom, as they include the Maple Leafs and Blackhawks. Chicago went into this post-season as a 12th seed underdog, while Toronto was expected to do more damage than they were able to.

Needless to say, although I’m a hockey fan through and through, I’d be lying if I didn’t admit that I’m happy I at least have one of my two teams still involved at this point in the playoffs. There’s no telling how much longer they’ll stick around, but they’re in the fight so they have a chance.

My peak as a fan will come when the Leafs and Hawks meet in a Stanley Cup Final. It’s been unlikely in recent years, but as long as they’re on opposite sides of the league it continues to be a possibility.

Finally, the First Round

Setting the stage for the First Round, things turn to the more typical best-of-7 format. Here’s what my insights lead me to believe, from what I’ve witnessed to this point through the 2019-20 campaign.

Some familiar foes meet again, as they seemingly do every post-season, while there are some fresh storylines that will surely come from newer battles.

Vegas took over the 1st place seed in the West. They are deep through all areas of their lineup, but not so flashy that it’s obvious. An immediate narrative involves Robin Lehner between the pipes against his former colleague Corey Crawford.

Chicago has already shocked hockey, beating McDavid’s Oilers. And they have no shortage of their own star power. They simply make it more of a visual display, so it’s impossible to ignore. The Golden Knights will see so for themselves in this one.

It's always more fun when both of my teams are involved at this stage of the season. The peak of my fandom would be to see them both in a Cup final. But, at this point, I'm happy to still have one I can cheer on. 🏆#Blackhawks #LetsGoHawks #AllforOne #HockeyTwitter #StanleyCup pic.twitter.com/q6mGEUEmry

Admittedly bias, I don’t bet against my teams. And I’m not going to start now. The Blackhawks soar in this one, 4-2.

Colorado continues to snowball its offensive onslaught. They’re ready to throw it towards anyone that gets in their way this post-season. While Arizona earned an upset to get past their play-ins, with a performance not many were anticipating.

This may be one of the more interesting match-ups, with an unproven and hungry Coyotes squad looking to overcome another hurdle that no one expects them to. Sure, they deserve credit where it’s due, but the Avs have been earning theirs for years.

I’m sticking with the Avalanche to pour it on towards a 4-1 end.

Dallas was already sitting pretty, knowing they had a playoff spot, while Calgary had to win to get here. The Flames have reignited their passion to play while the Stars haven’t done much to impress. Each with game-breakers, which will show up?

With these organizations experiencing some inconsistent success of late, both have a chance to take a step forward. I think we’ll see a lot of chances created, as both teams come out ready to pour it on to take control. Bounces will go back and forth.

Flames are keeping their fire lit as they move on after a 4-2 victory.

Clearly being the reigning Stanley Cup champions hasn’t scared any of their opponents thus far, as St Louis lost their 1st place seed going winless in the round-robin. Vancouver, on the other hand, has gradually built up a reputation hard to not notice.

The Canucks roster demands respect. From the way it’s built to how those throughout it have improved. The Blues, on the other hand, could be showing that they’ve overachieved the past couple of years and might not be that untouchable after all.

Vancouver will make sure more of Canada moves forward, winning their series 4-3.

If you are someone who expected Montreal to do what they did against Pittsburgh, kudos. I certainly did not. However, I think it may be equally as impressive for any objective observer to have predicted Philly’s dominance through their round-robin.

Sure, the Canadiens are in and that gives them a shot. But the Flyers have quickly shown the rest of the league that they’re not here for the participation ribbon. This is an intimidating Philadelphia team, far more prepared to progress and ready to win.

Get the brooms out, as Philly will sweep 4-0.

Does anyone really expect the Blue Jackets to do what they did to Tampa last playoffs, again? There is no way the Lightning are letting that happen, after such an embarrassing end to their Presidents’ Trophy-winning year through 2019-20.

Tampa quietly achieved a sneaky amount of success this season, maintaining a composure that would surely start to sparkle whenever they wanted it to. Columbus, on the other hand, has already exhausted a lot of energy through a full play-in series.

Lightning will strike quick and they’ll only need five games to close it out it 4-1.

Winning the Stanley Cup merely a couple of years ago has elevated the Capitals into a territory of the league shared by only a few other franchises. All the while, New York’s young talent continues to showcase what their organization is preparing to do.

The Caps have become a well-oiled machine, with its engine ready to go at all times. That’s an intimidating opponent on any given night, let alone in the Stanley Cup Playoffs. On the other side of the rink, the Iles are just getting warmed up.

Washington capitalizes more often throughout this round, taking it 4-2.

Often looked at as having the best line in hockey, the Bruins haven’t really done much to show off any of that skill. Going winless through their round-robin only helps further their opponent’s confidence, which Carolina has built up on their own.

The Hurricanes are a fun team around all aspects of the game. Their enjoyment will continue, as Boston finds ways to love the game less. The Canes will not be as easy to overcome as they once were and the Bruins will experience that first-hand.

Carolina steamrolls the Bruins, winning the round 4-2.

Whether we’ll see a full slate of upsets or a complete landslide by the favourites is yet to be seen. What we do know, however, is that we’re one step closer to the NHL crowning the 2020 Stanley Cup champions.