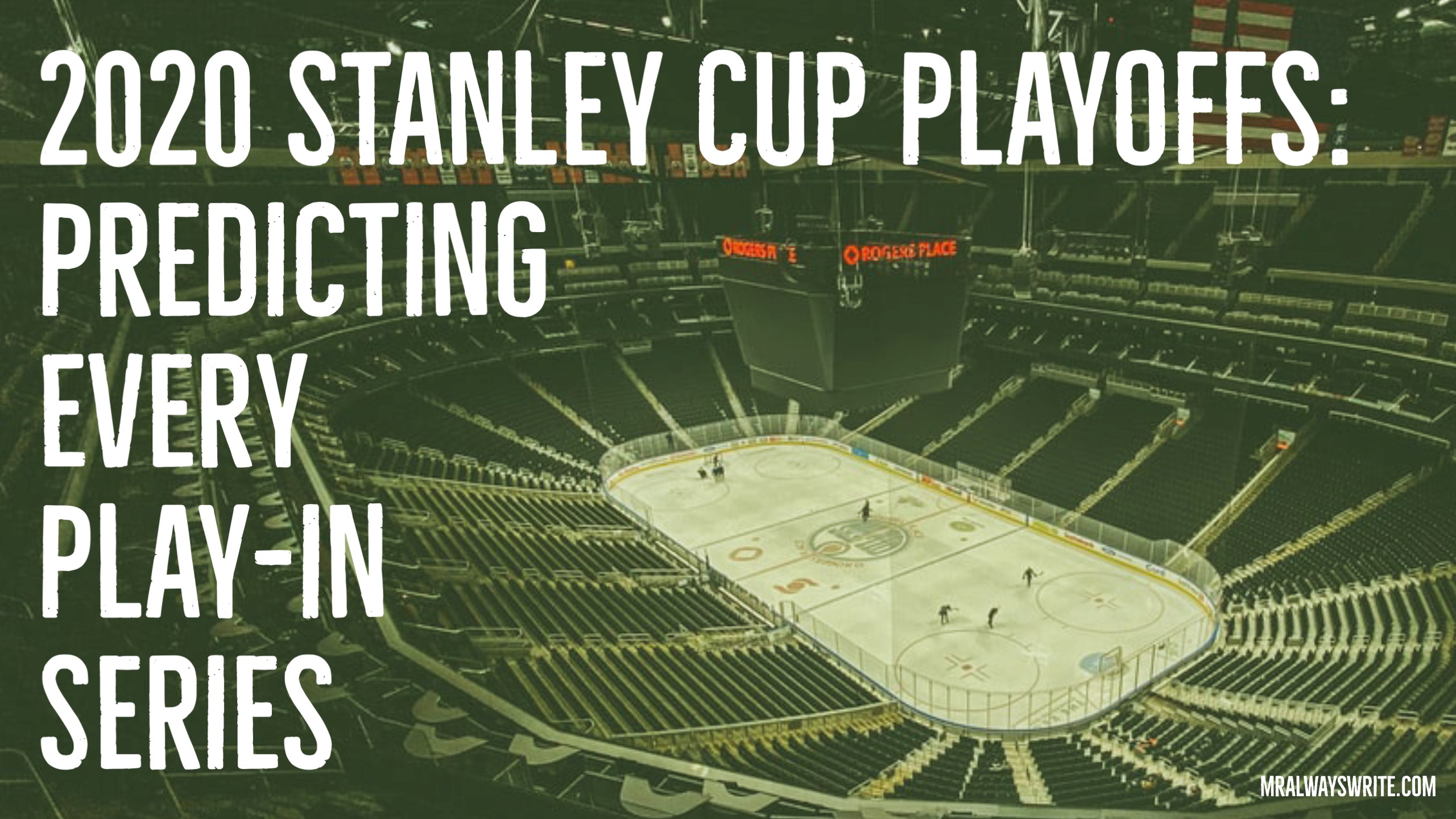 16 teams will be taking part in the Stanley Cup Qualifiers to determine which will round out these playoffs.

If I haven’t yet made it glaringly obvious across my socials, I’m a hockey fan. Having recently joined FanSided’s Editor In Leaf and Blackhawk Up teams, I’ve dug deeper into my fandom than ever before. With the Stanley Cup on the line, there’s no way I wasn’t going to talk about it.

My teams are the Toronto Maple Leafs and the Chicago Blackhawks. Yes, I have two favourites. I’ve effectively fielded this supposedly controversial conversation throughout my life, so it’s never a surprise when someone else brings it to my attention. Feel free to question my stance about it being permissible to cheer on more than just one franchise.

You’ll lose the debate, but I’m happy to have it.

Yes, I have two favourite teams. No, I don't care that you think I should only have one. 🏆 #LeafsForever #StanleyCup #AllforOne @MapleLeafs @NHLBlackhawks @StanleyCup @EditorinLeaf @Blackhawk_Up pic.twitter.com/55YW8AIPvM

With the NHL’s Return to Play, things will run a little differently this year as compared to how they are normally structured.

The tournament kicks off with a battle for the last remaining eight playoff spots, with the Stanley Cup Qualifiers. Both Toronto and Chicago are taking part, along with 14 other teams.

Each play-in round is a best-of-5. They involve the 5th-12th placed teams from each respective conference. 1st-4th will play in their own round-robin games against each other, to determine their post-season ranking from that point forward.

The 2020 Stanley Cup Playoffs will include re-seeding through each round, as opposed to a static bracket structure.

THE BRACKET IS SET 🙌

Who's your pick to win the #StanleyCup? pic.twitter.com/UsXpgYL44n

Hub cities were selected across each side of the continent. All Western Conference activity is scheduled to take place in Edmonton, while the Eastern Conference will see their match-ups play out in Toronto.

Here’s how I see each of the Stanley Cup Qualifiers panning out.

The Leafs are going to come out quickly, with their collective foot on the gas from the moment of that first puck drop. But beating the Blue Jackets will be no easy task. Columbus is a defensive-minded team, built with work ethic at their core, while the Maple Leafs play to produce on the scoreboard and are driven by elite-level talent.

Toronto will score as much as their fans expect, while shutting things down far better than anyone anticipates, and it will fluster the Blue Jackets right out of the playoffs.

Hockey's back, which means debates and discussions will follow. Check out my game by game and series predictions with @EditorinLeaf, for the @MapleLeafs in their play-in round against the @BlueJacketsNHL. 🏆 #LeafsForever #CBJ #StanleyCup #HockeyTwitter https://t.co/8vxbkhe76H

The Maple Leafs take this series 3-1 and progress through the post-season for the first time in far too long.

After they shocked the hockey world with their resurgence through 2018-19, the Hurricanes came into 2019-20 ready to take their journey further. New York saw some powerful offensive output this season, but their scoring alone didn’t even do enough for it to make sense that they’re still involved at this point in the year.

The Rangers have no momentum to start things off, whereas Carolina is looking to keep building on theirs. The Canes will take this one with their collective approach.

Carolina will have complete control as they win this round 3-1 and move into a playoff position.

Too much is being made of Cary Price’s ability to carry his Canadiens any further than he already has. Meeting a Pittsburgh team that continues to find ways to win, even amidst injuries and inconsistent play, is not something a goalie can overcome on their own. Good teams create success and that’s what the Penguins continually do.

Pittsburgh is a team that always looked poised to win and that’s a visual that isn’t going away. As a direct contrast, Montreal won’t make this one much of a match-up.

Pittsburgh sweeps 3-0, for the only series requiring the minimum number of games.

As leadership left the organization a couple of years ago, the Islanders looked straight to their talent pool of prospects and youthful core to pick up the pieces. And they did, as they continue to, in surprising fashion. Florida, on the other hand, has their own proven producers but just can’t find a way to tie it all together for a complete team game.

Individual players can only do so much and that’s been the narrative surrounding the Panthers for some time now. Whereas the Isles continues to progress their cohesion.

New York settles some early back and forth action, lifting their play above and winning 3-1.

Winnipeg didn’t have the type of season they expected and were scrutinized throughout most of it as a result. On the bright side, getting to witness the goaltending performance that backed them all season should be incentive enough for the rest of the team to start this series ready to work.

The Flames typically have energy flowing through their dressing room, but that fire just wasn’t fuelled this campaign. The Jets will speed by, stopping Calgary’s chances of finding a re-charge.

Winnipeg’s ability to adapt and change the course of their campaign will be enough to secure this series 3-1.

The Predators have seemed to sneak up on us all to become perennial contenders. Arizona will still be working their way through the surprise departure of their now former GM, which will overshadow the ability of their playoff performers and they’ll miss key chances to close things out.

Nashville is built with solid pieces up and down their lineup and any opponent should be scared of their strengths. The Yotes just aren’t there yet and won’t have enough to win this fight.

Nashville’s steadiness through a shared spotlight of their entire lineup earns them the 3-2 edge.

After the heights reached by the Blackhawks last decade, their stance atop the standings has slipped. However, with the type of leadership they still embrace at their core and young talent that’s already making their mark, their different generations of star power just can’t be matched by the Oilers.

When looking beyond Edmonton’s top point-getters, the issue is how dramatically things drop from there. The Hawks have more players who actively contribute and that will be a pivotal factor throughout.

I put together some bold predictions of what we'll see from the @NHLBlackhawks in their play-in series against the @EdmontonOilers, in my latest for @Blackhawk_Up. Agree with any? 🏆 #StanleyCup #Blackhawks #AllForOne #LetsGoOilers #HockeyTwitterhttps://t.co/EABIHoSjUI

Chicago is set to surprise, as they claw their way from the bottom and straight into the next round with a 3-2 victory.

Often feeling inferior across Canada, Vancouver hasn’t really been given much attention throughout the league’s landscape for some time. However, with the type of talent that now represents their franchise, it’s impossible to look away. Meanwhile, the Wild are doing much of the same losing that has become their norm.

As much as Minnesota may be known as a hockey city, they’ve been too stagnant to start planning any celebrations. The Canucks are sure to garner even more forced focus on their market, as their stars really shine in this one.

Vancouver will work for every single win, but it won’t be very hard for them to take it down 3-1.

As the NHL sets the stage for the 2020 Stanley Cup, fans will start to be inundated with hockey. As I’ve said all along, the safety of everyone involved needs to continue being the priority and only then can we focus on enjoying the action.